'There has to be somebody' 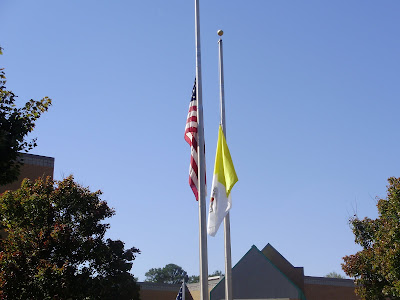 Homecoming weekend is a large annual celebration at Blessed Trinity Catholic High School. 'Welcome back alumni' signs, tents, and ribbons in the school's yellow and green colors lined roads as I drove through the Roswell, Georgia, campus on Saturday, October 9. Yet while approaching the school itself, it became clear that Homecoming 2010 would be different. Patriotic displays lined sidewalks near the entrance, and flags flew at half-staff against a bright, blue sky. On this warm southern fall day, citizens would unite to honor a humble protector.

I wanted to write about 1st Lt. Scott Fleming, who was from my community of Marietta, Georgia, since receiving a September 20 Pentagon release about his tragic death three days earlier. Instead, I set out to learn more about why this 24-year-old man joined the Marines and how he felt about deploying to Afghanistan. A poignant, deeply affecting celebration of the Marine's life inside the Blessed Trinity auditorium provided those answers, starting with why his high school was such an appropriate venue for the Memorial Mass.

"From the fiction of G.I. Joe to reality, we remember the day, time, and moment that we were attacked in Washington, D.C., Pennsylvania, and of course, New York," Rev. Ricardo Xavier-Zawtown Bailey, the high school's chaplain, said to mourners. "It was an enemy that many of us thought never existed. We knew about terrorists, but surely they wouldn't have the gall to attack us."

"This young man was so moved by that single event, that on that day, as a Blessed Trinity student, he resolved to stand up." 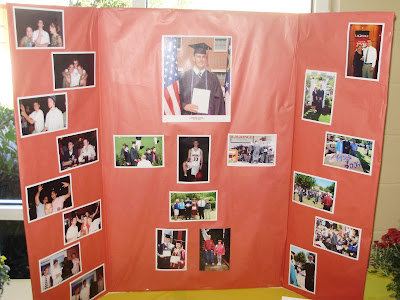 As a smart, popular, tall basketball player nicknamed "Scottie Too Hottie" by adoring females, why would Fleming strive to spend part of his early adulthood in Afghanistan, one of the most desperate countries on the planet? As I listened to the grief and pride in the voice of his high school basketball coach, who stood at a podium in front of a gigantic American flag and cross, it started to make more sense.

"It was his self-sacrifice and determination that led to the turnaround of our basketball team," assistant principal Brian Marks said. "He earned the respect of all of his teammates and coaches."

Blessed Trinity had a terrible basketball team when Fleming arrived, but by the end of his senior year, the team had won its first-ever playoff game in an unlikely upset. By fully dedicating himself to a cause he cared deeply about, the young man believed victory was possible, no matter the odds.

"He will be remembered as a leader who took initiative to change things for the better," Marks said.

The overflowing crowd, including respectful mourners in suits and dresses sitting in the huge auditorium's aisles, left no doubt about the impact Fleming had on his community. Half a world away, the raw emotion on display at a September 25 remembrance ceremony at Patrol Base Jaker in Afghanistan showed how much he meant to his fellow Marines. 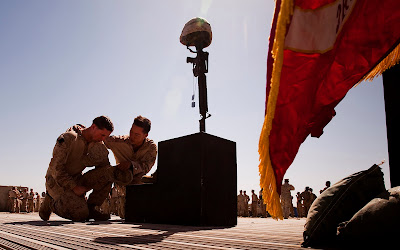 "As a Marine officer and friend, he made a big impact on our lives," said Sgt. Jorge Diaz, a squad leader with Kilo Company. "He died doing something he cared about."

When an American service member is killed in Afghanistan or Iraq, we often hear that they died protecting freedom. 1st Lt. Fleming was doing exactly that when he was hit by small arms fire and killed. Just over nine years after watching the Twin Towers fall on television from his high school classroom, Fleming was guarding a polling station in Afghanistan's Helmand province as citizens braved threats from insurgents and terrorists to vote. I recently forgot to vote in a local primary election here in Georgia, but after hearing about what Fleming and fellow Marines in the 3rd Battalion, 3rd Marine Regiment, 3rd Marine Division, III Marine Expeditionary Force did on September 17 to give civilians a chance to cast ballots in a war zone, I will never fail to exercise my right to vote again. 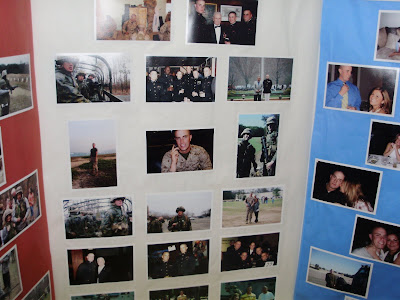 Back at Blessed Trinity, the priest delivered a fiery, passionate sermon, challenging anyone who complains about being an American to think long and hard about the fallen hero's sacrifice. He even led mourners in the singing of 'God Bless America,' which led me to recall the famous scene at the end of 'The Deer Hunter,' when working class characters stunned by the horror of losing their friend in Vietnam spontaneously sing the song in earnest. Yet the most personal, unforgettable moment of the dignified two hour ceremony came when Rev. Xavier-Zawtown Bailey walked to the middle of the auditorium, stood in front of Fleming's grieving family, and spoke to them one by one.

"The love you and Scott shared will sustain you for many, many days," the priest told Fleming's widow, Brandi, whose sunglass-shielded eyes still managed to meet the chaplain's.

"He is proud of you and he wants you to continue being a good young woman," he said to the fallen Marine's younger sister, Andrea, who clearly had a special place in her sibling's heart.

As Van Morrison played softly over the loudspeakers while mourners quietly exited and wiped their eyes, a refrain the priest repeated was already in my head. "There has to be somebody." When America was attacked, this young man didn't hope that strangers would hunt down the terrorists responsible or protect his loved ones. He decided to spend the next few years educating, training and preparing to do it himself.

1st Lt. Scott Fleming was buried on October 7 at Arlington National Cemetery with full military honors, in what was undoubtedly a painful ceremony. Yet the brilliant blue sky two days later, above the place where he first decided to serve his country, makes the following passage on the last page of his Memorial Mass program ring true. 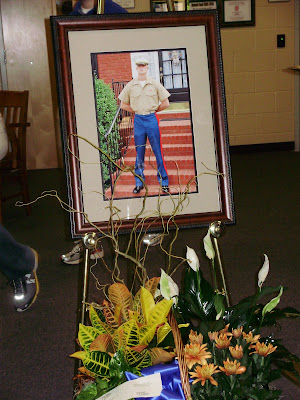