Something to talk about 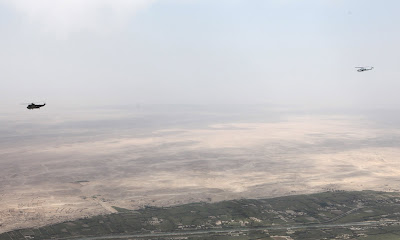 Every single day, important events on the ground in Afghanistan are missed by the national press. From clearing roads of improvised explosive devices and capturing or killing insurgents, to protecting innocent children and making the ultimate sacrifice, American troops are doing their jobs with humility and diligence.

On October 6, coalition troops killed three insurgents and detained three more during an IED-sweep in southern Afghanistan. According to an ISAF Joint Command article, an Afghan civilian said the terrorists demanded food and water from her, threatening to harm her family if she didn't surrender her belongings.

On October 1, men and women fighting on the ground helped get an injured ten-year-old out of the Qadis District of Baghdid province after he was wounded by shrapnel from insurgent-launched mortar fire. A Combined Joint Special Operations Task Force release said that after the boy was hurt, the child's uncle rushed the child to a coalition base to try to save his life. Hopefully, more and more Afghans are realizing who they can turn to during times of crisis. It isn't the Taliban.

As airmen continue flying long, grueling missions through terrible weather and American service members continue training Afghan police cadets, there are many positive developments from Afghanistan to report. Tragically, fallen American heroes continue returning to Delaware's Dover Air Force Base in flag-draped caskets after volunteering to fight in America's post-9/11 conflicts. Over the last three days, the Pentagon released the identities of seven departed warriors, all killed in action in Afghanistan.

The loved ones of the fallen Airman, Marine, and five Soldiers killed in action have seen their lives altered forever over the last 72 hours. We grieve for them, and also recognize that our lives are also deeply affected by the sacrifices being made every day by valiant men and women willing to risk everything to give us a chance at the American dream. If you ask me, that's worth talking about.