'We have lost a remarkable young man' 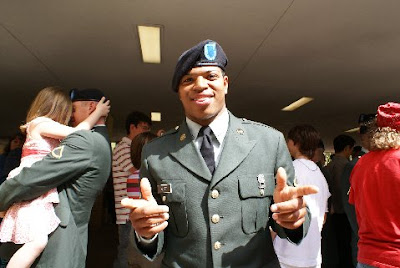 I do not believe simply listing a fallen servicemember's name in a newspaper, TV graphic, or website sufficiently honors their sacrifice. It is important to learn more about every person who volunteers to fight for our great country, so we can understand these extraordinary men and women who lay everything on the line so future generations can be free.

Pfc. Gifford Hurt was just starting his career in the military, as this coming Friday marks the one-year anniversary of the young man's enlistment. Tragically, it is also the day Hurt's family plans to bury the beloved 19-year-old soldier, who was killed on January 20 in Mosul, Iraq. An official news release said he was killed in a "non-combat incident" being investigated by the Pentagon. His grieving mother, Lisa Davis, said in an e-mail that she was told her son was the passenger in a Humvee that overturned when the unidentified driver, who is expected to survive, lost control. Even through her grief, Davis, who I have been honored to exchange messages with these last two days, has beautiful memories of her departed child.

"My son was a strong willed individual that loved honor," Davis wrote. "He was a hard worker, loving friend. He would do anything in the world for anyone that needed it. We have lost a remarkable young man and potentially wonderful leader for the U.S. Army."

Davis said Hurt joined the military straight out of high school, fulfilling a lifelong dream to serve his country. While she said Gifford was already well-mannered, nine weeks of basic training at Oklahoma's Fort Sill enhanced his values even further. She recalls many conversations with her son, including some late night and early morning Skype calls while he was in Iraq.

"I wouldn't close my eyes until he called me on Skype and said the same words that he said all the time: 'hey ma,' with his beautiful husky voice," Davis poignantly recalled.

Hurt wanted to serve many years in the Armed Forces, perhaps hoping to follow in his mom's footsteps. Davis served 22 years in the military, retiring in 2007. While Gifford never got the opportunity because of the apparent accident, it is clear that he touched many lives in his brief time on earth.

"I have recieved numerous e-mails from soldiers that he served with, and friends from around the world that knew my son," Davis wrote.

The young hero from Yonkers, New York, also leaves behind his siblings, who relocated to the south. His mom, who is asking for our prayers and will certainly receive them, will undoubtedly miss those late-night Skype conversations in the coming weeks, months, and years. But she knows he can still see her from a much better place than Iraq -- without an internet connection.

"He is probably smiling down on me now, knowing that his memory will never, ever be forgotten."