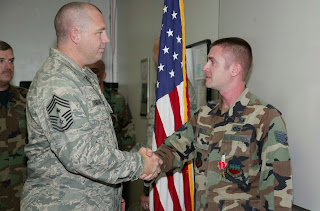 The Pentagon sent out this news release moments ago:

Ginett is pictured above on the right, being presented the Bronze Star for exceptional service as an explosive ordnance team leader in August 2007. In May 2009, Ginett was promoted to technical sergeant, according to the Air Force Times.

An Air Force newsletter published in Iraq mentions Ginett being deployed at Tallil Air Base in 2004. Speaking about how he planned to spend that Christmas, Ginett said: "Probably just working a regular shift -- but I'll make sure to call my family back home."

Tonight, his family mourns. We grieve along with them, as a great American who spent the last years of his life defending our nation is no longer with us.