War is not a movie

As I said on Friday, I have never served in the military or put my life on the line for others. Most journalists haven't. So writing about our troops and their families for these last few years has been a very eye-opening learning experience.

U.S. troops and their loved ones are some of the most incredible, selfless people on the planet. That said, they are not perfect. These are ordinary people under extraordinary pressure that few of us can imagine. Even the bravest heroes sometimes have personal and family conflicts, and they deserve our compassion and respect.

There have been some great war films. Some of my personal favorites are The Hurt Locker, The Deer Hunter, Saving Private Ryan, Taking Chance, and Born On The Fourth Of July, even though its overall message is decisively antiwar. Those films all portray Americans who make incredible sacrifices, but are also sometimes conflicted about family, friends, or even the wars they are fighting in.

One thing that needs to change, however, is the notion that it is all black and white. Hollywood and the press often take two extremes when portraying troops; they are either flawless heroes or dishonorable villains. The reality is that almost everyone serving is an honest American trying to do the best they can to serve their country and provide for their families. That is why I want the media to spend more time reporting on who these men and women truly are, because it will reveal the depth of what they sacrifice for us on a daily basis.

Instead, the press often chooses to obsess over every small detail of celebrities' lives. Clearly, Hollywood stars and sports figures are not perfect, but the difference is that they didn't volunteer to defend their country. Acting in a movie, singing a song, or hitting a home run is not as impressive to me as hauling 20 suitcases in an airport after flying for 20 hours. Is that not more compelling than some celebrity who openly admits she's only "famous for being famous?"

My grandfather, a World War II veteran, has always been captivated by Joltin' Joe DiMaggio. The baseball hall of famer was not a perfect man, by any means. He was a sports icon and a celebrity, and the media obsessed over his relationship with Marilyn Monroe. But, pardon the pun, there is a big catch. The Yankee Clipper volunteered to leave one of the most high-profile spots in the world, the center field grass at Yankee Stadium, during the prime of his career. And he did it to serve his country during World War II. Oh where have you gone, Joe DiMaggio? 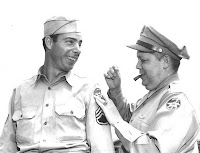