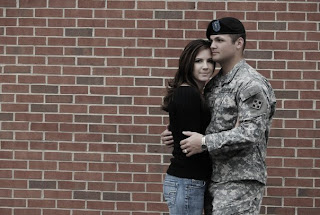 I am honored that my last story for CNN is about an exceptional soldier, 1st Lt. Tyler Parten, and his wonderful girlfriend, Meg Reedy. It is posted on CNN's Afghanistan Crossroads blog, which is one of the few examples of the national media doing war coverage the right way. Speaking at length with Meg and his mother, Lona, has been a very eye-opening, emotional experience for me personally. Special thanks to both of them for their invaluable assistance in getting this story out to the world, and I look forward to writing more about this hero soon.

On his way to Afghanistan, 1st Lt. Tyler Parten made a phone call to the woman he realized he wanted to spend the rest of his life with. Parten told Meg Reedy that he loved her, and after his deployment, he wanted to travel with her to Africa, where she planned to become a minister to some of the world’s neediest children.

After his departure from Colorado on uncertain terms, Reedy and Parten would spend many late nights over the next few months talking via phone, e-mail, and Skype, where Reedy said Parten’s eyes still sparkled over a computer screen. The couple wanted to live together in an African hut and spread their message of faith to youth, with little regard for material gain or personal safety.

“I didn’t choose to fall in love,” Parten e-mailed his family from Afghanistan on July 11. “According to my plan, love was much further down the line.”

Before he could ask the preschool teacher to marry him, the 24-year-old U.S. soldier would be surrounded by the mountains of Afghanistan, during one of the deadliest six-month periods of the eight-year war. He died September 10 of wounds sustained when insurgents attacked his unit in Kunar province, becoming one of the more than 1,500 U.S. and coalition casualties in Afghanistan since the start of the war.

Reedy said that while in Afghanistan, Parten kept his focus on children born in one world’s most troubled countries.

“Our last conversation was about the kids,” Reedy, 26, told CNN. “He talked over and over again about the smiles of children, helping them, and giving them water or candy.”

Parten’s Facebook page was filled with stories of entertaining young Afghans. “Tough days make the good days that much better,” said one of Parten’s final Facebook posts, which was noted by the Colorado Springs Gazette while reporting his death.

Reedy, who lived near Fort Carson, where she met Parten, was with a fellow girlfriend of a deployed soldier when her phone rang. When she saw the late-night call was from Parten’s mother, Lona, she could not bear to pick up the phone.

“Please don’t say it,” Reedy said when she called back. When given the grim news, Reedy repeated “no,” even as the grieving mother gently responded with “yes.”

While experiencing emotional and physical pain she never thought possible, Reedy joined the Parten family in Marianna, Arkansas, to grieve and attend the soldier’s memorial service. The celebration of 1st Lt. Tyler Parten's life was planned by the soldier's brother, Daniel, a West Point cadet who is also deeply inspired to serve. While commending the Army’s compassion and attention to detail while honoring Parten, Reedy said it was important to emphasize his worth to those who knew him, not just to the military.

Parten loved music and would tell stories of playing his harmonica for children in Afghanistan. In one instance, he told Reedy a small village gathered to watch him play, after kids ran to their parents’ huts in astonishment. “The American soldier is playing music for us,” Parten, who was fluent in Arabic but not the village’s native Pashto tongue, deciphered one of the kids exclaiming.

“People left with tears in their eyes, but smiles on their faces,” Reedy said.

During their lengthy conversations about Parten’s education at West Point, basic training, and even possible death in Afghanistan, Reedy said the man she hoped would be her husband never revealed his feelings about the political debates surrounding the war effort.

“He always knew he was about serving others and making a difference,” Reedy explained. “He didn’t want to just get by, by only doing his job as a soldier.”

Like the man she loved, Reedy is not content living a life void of sacrifice or risk. With Parten in her heart instead of holding her hand, she has applied to a youth ministry project in Sudan, a country she concedes may be as dangerous and unpredictable as Afghanistan. Like The Tyler Parten Foundation started by the soldier's sister and mother, Reedy said she also wants to help kids in poverty-stricken, war-torn nations.

Reedy said she has prepared her family for the possibility she may not return from Sudan, if accepted into the program. But emphasizing her faith, she believes her destiny is pre-determined.

“Without my faith in God, I don’t know if I could have made it this far,” Reedy said.

If Reedy realizes the couple’s dream of sitting under the stars in an African hut, planning the next day’s Bible verses to read to children, she will likely recall an excerpt of one of the last e-mails Parten sent to friends and family. It was composed on the side of an Afghan mountain, on the soldier’s final Fourth of July.

“As for me personally, I'm both excited and a bit nervous. I'm ready to get out there and do what I've been training to do, what I feel I am meant to do, leading men in combat, but at the same time I'm anxious in the ambiguity. It seems I can never know what to expect next, but I suppose that's a good thing, for like I said, God has a plan that always seems to put my own plans to shame.” 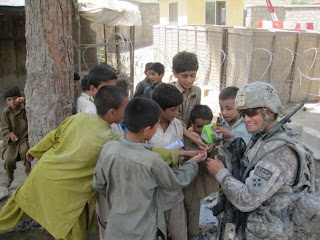